The concept of place of effective management was introduced in the finance bill 2015 for determination of residential status of company.

Thus, initially, a company would have been considered as a resident in India provided the control and management of its affairs were wholly situated in India. Thus, it provided an opportunity for the companies to avoid tax by shifting insignificant or isolated events related to control & management outside India.

For instance, since the initial provision provided for the entire control & management to be outside India and that too for the entire year, the companies would often hold a few meetings outside India to escape the applicability of the residence rule, thus eluding the taxation in India.

POEM refers to a place where the key management and commercial decisions necessary for conducting a company's business activities are made. Since the residential status of any entity is to be determined every year, POEM is also required to be determined yearly.

However, POEM guidelines shall not apply to companies having a turnover or gross receipts of Rs. Fifty crores or less in a financial year.

The process of determination of POEM would be primarily based on the fact as to whether the company is engaged in active business outside India (ABOI). 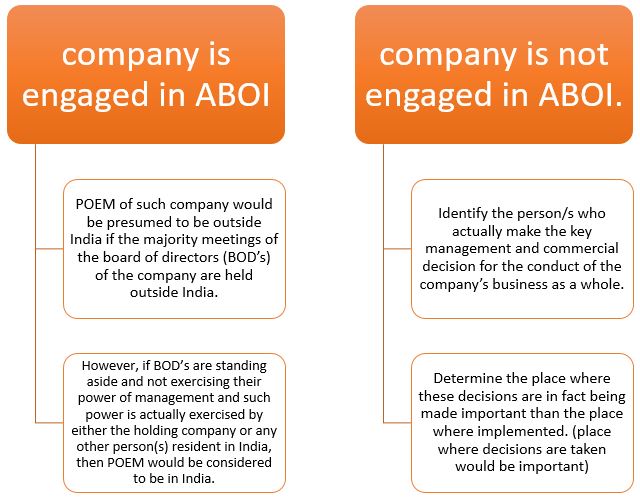 Foreign Co. shall be said to be engaged in ABOI if all conditions are cumulatively satisfied:-

Condition1: Passive Income (income directly from associated enterprise) is not more than 50% of total income &

Condition 2(a): Asset test: less than 50% of total assets situated in India &

Condition 2(b): Employee test: less than 50% of employee situated / resident in India &

IMPLICATIONS OF THE POEM

If any foreign company is found to have a POEM in India, the same would lead to the following consequences:

The entire global income of such foreign company would be subjected to tax in India as per Sec 5(1) of the Act.

Note: If an entity is engaged in the business of banking or is a public financial institution, income by way of interest shall not be considered passive income.

It shall be the average of the value of the assets in the country of incorporation of the company at the beginning and the end of each year.

The term 'payroll' has been defined inclusively to include the cost of salaries, wages, bonuses, and all other employee compensation, including the employer's related pension and social cost.

The following scenarios give an insight into the determination of POEM:

Example 1. Below is the list of companies, determine whether place of effective management is applicable.

Example 2: All the directors of Co. A are residents in India. During the previous year, 5 meetings of the BODs were held as follows: (Assume company is engaged in ABOI)

Finding: Since the company is engaged in ABOI and the majority of meetings i.e. 3 out of 5 are held outside India, POEM of Co. A would be presumed to be outside India.