A company is registered in accordance with the Companies Act and is a separate legal entity, distinct from both its shareholders, directors and managers. The liability of the shareholders is limited to the amount paid or unpaid on issued share capital. A company has perpetual existence. The owners and management is separated. The Companies Act, 1956 does, however, place many restrictions on the company for the compliance. It must maintain certain books of accounts, registers, and file an annual return, annual compliance with the registrar of companies which includes the accounts as well as details of directors and mortgages.

There are three types of companies keeping in view their nature, which is outlined below

Companies, where the liability of its members is limited to the extent of amount unpaid on the shares, held by them in the Company. For e.g. A has purchased 10 shares of Rs 10/each and therefore his total liability towards the company is limited only upto Rs 1000. Generally, more than 90% of the companies are incorporated with limited liability.

The aforesaid companies are further classified into the following:

The concept of One Person Company [OPC] is a new vehicle/form of business, introduced by The Companies Act, 2013 [No.18 of 2013], thereby enabling Entrepreneur(s) carrying on the business in the Sole-Proprietor form of business in a corporate Framework.

One Person Company is a hybrid of Sole-Proprietor and Company form of business, and has been provided with concessional/relaxed requirements under the Act.

Requirements for obtaining DIN and DSC 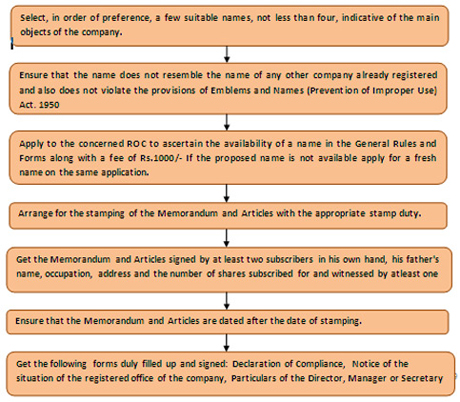 A Public company is company that has issued securities through an initial public offering (IPO) and is traded on at least one stock exchange or in the over the counter market. Although a small percentage of shares may be initially "floated" to the public, the act of becoming a public company allows the market to determine the value of the entire company through daily trading.

Benefits of a Public Company

Limitations of a Public Company 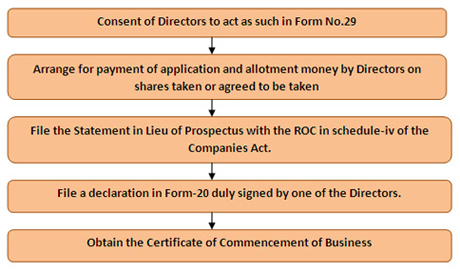 A public company is suitable where the volume of business is large, area of operation is widespread, the risk involved is high and there is a need for huge financial resources and manpower. It is also preferred when there is need for professional management in its operations. In certain businesses like banking and insurance, joint stock company form is the most suitable. Now-a-days, it is preferred form for most areas of business because of the preference for operating on large scale.

For some specific business purposes, Public & Private Companies takes the form of the following:

Producer means a person engaged in any of the activity connected with the following:

Under the Companies Act, 1956 you can also register a company for carrying on business , not for the purpose of earning profit but to serve mankind at large. Such type of company is generally called as Association not for profit or section 25 Company.

It is necessary to take the approval of Government of India, to form such type of company

Due to their nature of business, the Government of India has relaxed the application of various provisions of the Companies Act on such companies,

Under the Companies Act 1956, a company is require to comply with the following types of compliances:

Below are given such compliances

Annual Fillings are those fillings which are require to be done each calendar year with the Registrar of Companies, irrespective of whether the Company is carrying on any business or not, the various annual fillings are outlined below:

Following statutory registers are required to be maintained in compliance of various provisions of the Companies Act, 1956

Every Company has to maintain the necessary accounting records at his registered office in respect of the following:

All sums of money received and expended by the Company and the matters in respect of which the expenditure and receipt takes place. All Assets and Purchases of goods by the Company Assets and liabilities of the Company In case of companies engaged in class of companies engaged in production, processing, manufacturing or mining, activities, such particulars relating to utilization of material or labour or to such other items of costs as may be prescribed by Central Government.

The company can also keep these books of accounts at any other place in India by filling eform 23AA with Registrar of Companies within 7 days of decision.