I. CHANGE IN RESIDENTIAL STATUS

Previously it was 182 days or more in a financial year.

III. DUE DATE FOR TAX AUDIT.

The due for tax audit has been extended in the income tax act itself from 30th September to 31st October.

IV. RATIONALIZING THE PROCESS OF REGISTRATION OF TRUSTS, INSTITUTIONS, FUNDS

V. TAX ON EMPLOYER’S CONTRIBUTION TO PROVIDENT FUND AND OTHER FUNDS 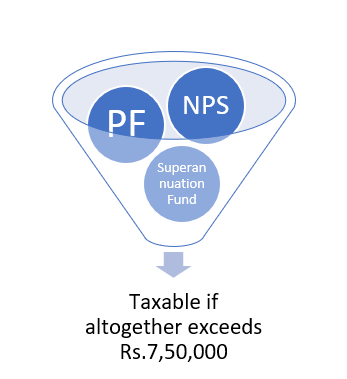 Under section 80M, for a dividend paying company it can avail deduction to the extent as below :

XI. EXEMPTION ON TAX ON ESOP

In the case of startups, employees possessing Employee Stock Option Plans (ESOPs) may defer paying taxes up to five years from the time of exercise, till the time they leave the startup, or until they sell their shares, whichever is earlier.

The government has proposed a new income tax regime under Section 115BAC that comprises a significant change in the tax slabs rates.

However, some taxpayers may not be able to switch back to the existing tax slab once they opt to follow the new one.

If the taxpayer is claiming more than the deductions mentioned in the table above, he stands to lose under the new regime.