New restriction of 20% on Input tax credit under GST

The CBIC has notified the Central Goods and Services Tax (Sixth Amendment) Rules, 2019 vide Notification No. 49/2019 – Central Tax dated 09-10-2019. The said Notification has also revamped the entire method of availing credit, by inserting a new rule.

What are the present conditions to claim Input tax credit ?

Below are existing conditions for claiming Input tax credit:

What does the new rule says?

1. Whether the eligible input that can be claimed will be calculated by the portal or it is self assessed?

A: This being a new provision, the restriction is not imposed through the common portal and it is the responsibility of the taxpayer that credit is availed in terms of the said rule.

2. What are the invoices /debit notes on which the new restriction shall not apply?

A: The restriction of availment of ITC is imposed only in respect of those invoices /debit notes, details of which are required to be uploaded by the suppliers in GSTR1

Therefore, taxpayers may avail full ITC in respect of

3. Whether the said restriction is to be calculated supplier wise or on consolidated basis?

A: The restriction imposed is not supplier wise. The credit that can be claimed is linked to total eligible credit from all suppliers against all supplies whose details have been uploaded by the suppliers. So it has to be calculated on consolidated basis.

4.Whether Calculation to be made is exclusive or inclusive of Blocked Credits and ineligible credits ?

5. How much ITC a registered tax payer can avail in his FORM GSTR-3B in a month ?

A: The eligible ITC that can be availed is explained by way of illustrations, in a tabulated form, below.

Example : Mr. A has made a purchase of Rs. 10 Lakhs by receiving 100 invoices involving ITC of Rs.1 Lakh.

80 invoices involving ITC of Rs. 7 Lakhs are appearing in GSTR 2A on due date of filling GSTR 1

90 invoices involving ITC of Rs. 8.5 Lakhs are appearing in GSTR 2A on due date of filling GSTR 1

6. When can balance ITC be claimed in case availment of ITC is restricted as per the new rule ?

7. Is it necessary to do invoice-wise GSTR 2A and Books reconcilations every month ?

A: A:Ideally, a registered person is required to do monthly GSTR 2A reconciliation with books to have track of invoices which are not uploaded in GSTR 1 by the suppliers.

But it will not be required to do the same in all cases.

Conclusion: The taxpayer may resort below flow chart to be not get affected by the new rule 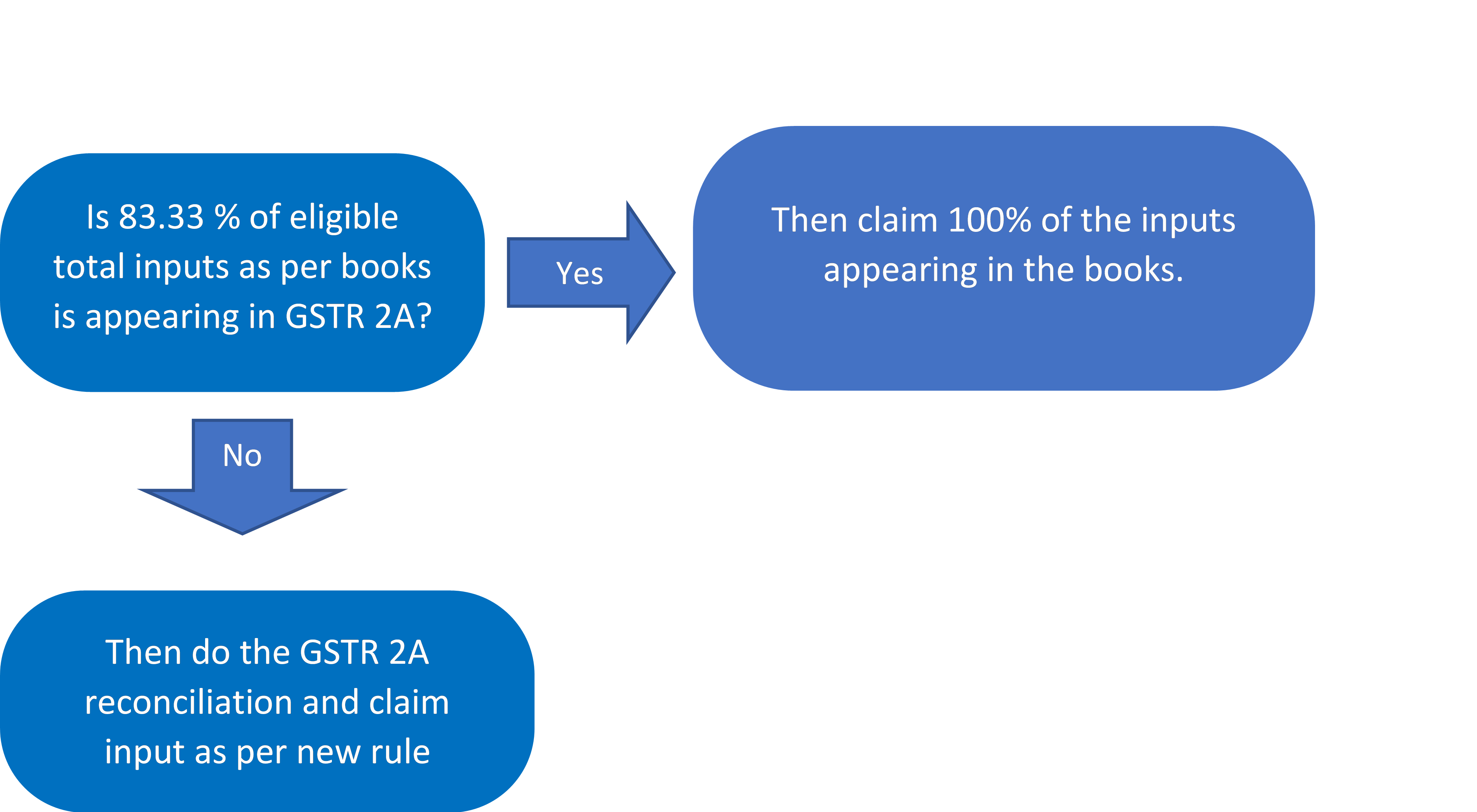 The new rule will be having an impact on the cash flow of the entity and consumes time in reconciliation of invoices with GSTR 2A and following up of suppliers for uploading the invoices within the due date.