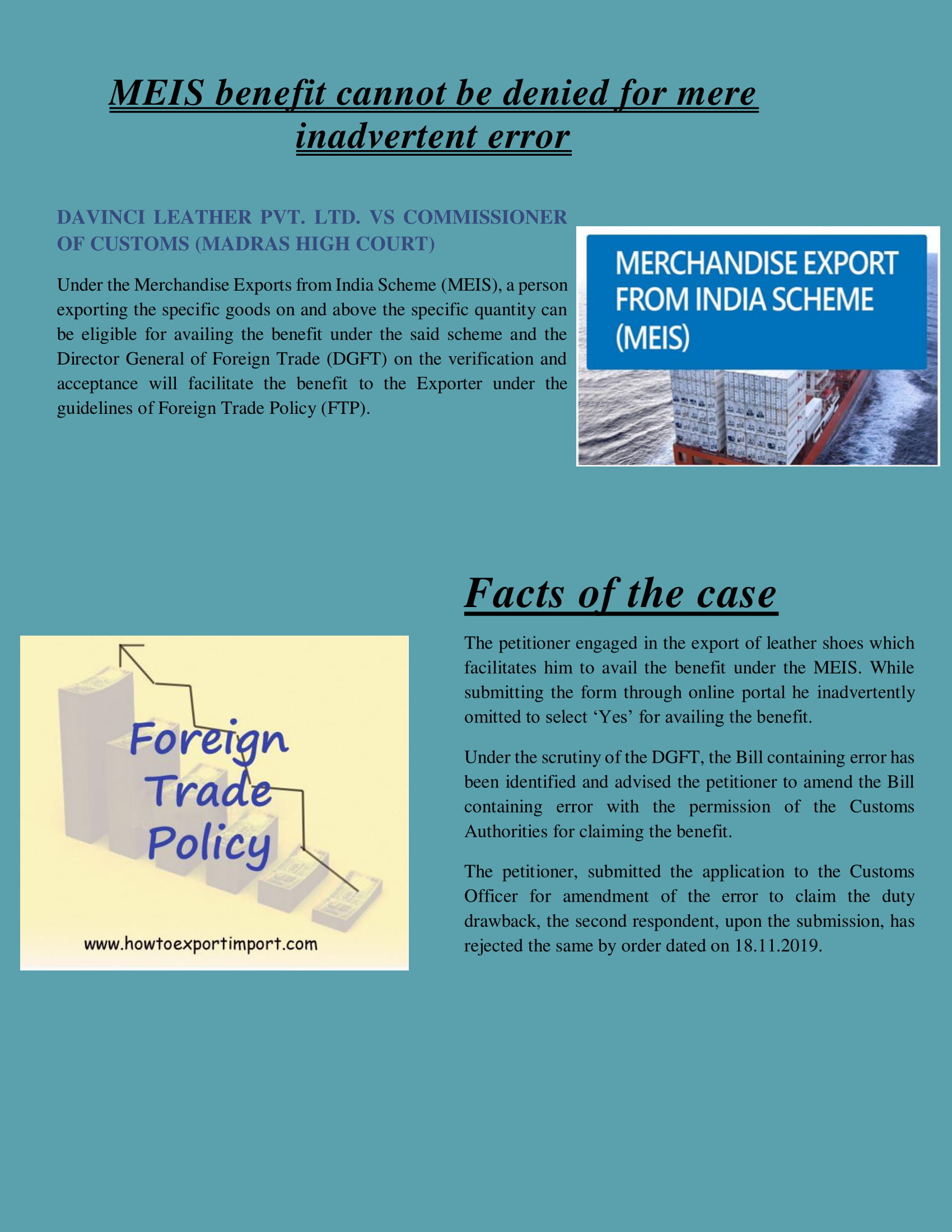 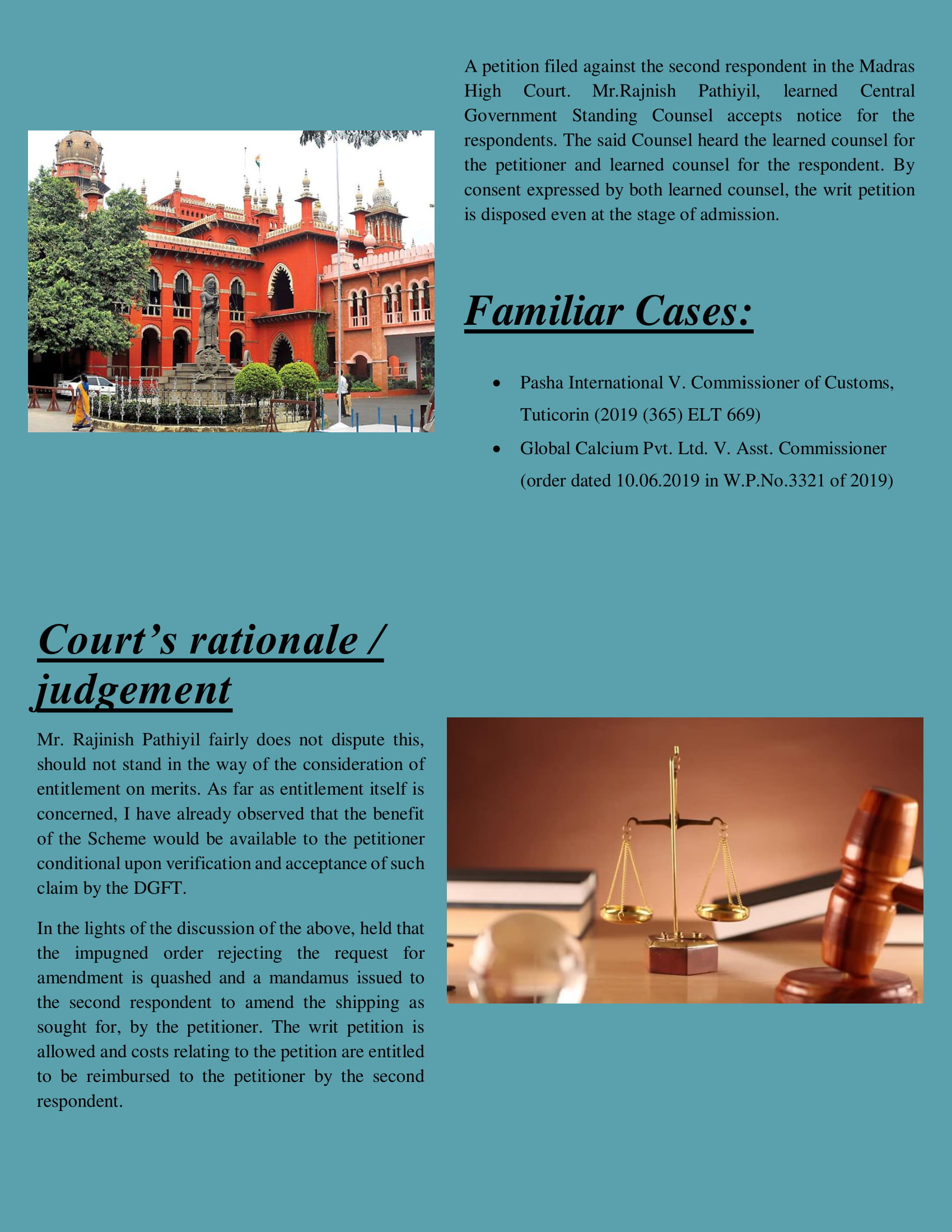 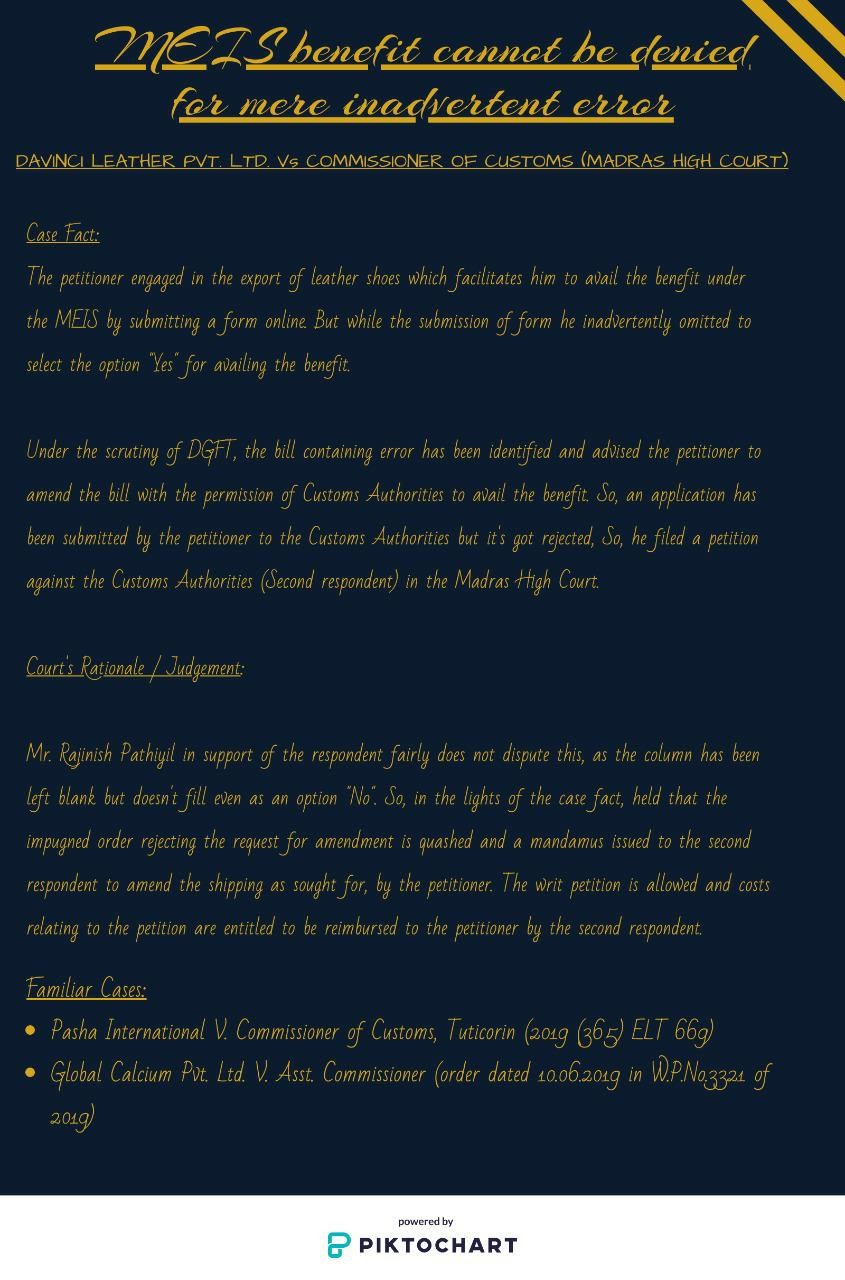 The petitioner engaged in the export of leather shoes. Under the Merchandise Exports from India Scheme (MEIS), a person exporting the specific goods on and above the specific quantity can be eligible for availing the benefit under the said scheme. So, the petitioner while filing of the shipping bill had inadvertently omitted to select ‘Yes’ on the online platform as an option for availing the MEIS benefit as said in the above context.

The entitlement to the MEIS benefit is verified and accepted by the Director General of Foreign Trade (DGFT) on an application made in this behalf by the petitioner. While examination, the DGFT found the error in the form submitted by the petitioner and advised the petitioner to have a shipping bill amendment by the Customs Authorities.

As per the advice given by DGFT, the petitioner made an application to the Customs Authorities for amendment in the Bill containing the error. The second respondent, upon consideration of the reasons mentioned in the application regarding the filed Bill containing error, has rejected the same by order dated on 18.11.2019.

1. Is MEIS benefit available even the option ‘Yes’ is not availed inadvertently in the online form?

2. Whether DGFT officials can override the Bill containing the error without the consent of Customs Authorities?

1. The petitioner as a bona fide, inadvertently omitted to select the option ‘Yes’ while submitting the file, so there might be a chance of further amendment or procedures imposed on the petitioner for availing the benefit but the benefit cannot be misplaced.

42. Article 300A provides that no person shall be deprived of property saved by authority of law. While right to the property is no longer a fundamental right but it is still a constitutional right. Credit earned under the erstwhile Custom Law is the property of the writ applicants and it cannot be appropriated for merely failing to file a declaration without error in this respect. It could have been appropriated by the authorities by providing the same for amendment in the Custom Law but it cannot be taken away by virtue of merely framing Rules in this regard.’

2. As per the explanations given by the Foreign Trade Policy the Director General of Foreign Trade (DGFT) doesn’t have any authority to amend the filed return with the prior permission of the Customs Authorities in this regard.

Mr. Rajnish Pathiyil fairly does not dispute this, should not stand in the way of the consideration of entitlement on merits. As far as entitlement itself is concerned, I have already observed that the benefit of the Scheme would be available to the petitioner conditional upon verification and acceptance of such claim by the DGFT.