GST ON SALE OF USED GOODS

The implications of tax on sale of used assets is one of the most complex things faced by an assesse. However, under GST, Government has tried to simplify the said issue by removing multiple and complex restrictions on cenvat credit availability on sale or disposal of used assets and introduced more liberal provisions as compared to previous regime.
For the purpose of taxability under GST and ease of understanding, Second Hand Goods are further bifurcated as follows:

*Motor Vehicles include car, trucks and vehicles used for transportation of goods and other passenger vehicles.

Concept of Margin Scheme under GST:

As per the GST law, the outward tax is always payable on the sale value of goods sold just like in earlier indirect laws. But under GST, there is a concept of margin scheme under which the registered person is allowed to pay GST only on MARGIN/PROFIT portion. Similarly if there is a loss, then no GST is payable.
This benefit of margin is available in case of supply of second hand goods to the registered person dealing in it.

However, there are two conditions which must be complied with in order to avail the above benefit:-

1. The said registered person has to pay GST on outward supply of such second hand goods and value for paying outward GST on such goods must be determined by following provisions of Rule 32(5) of CGST rules 2017 (Refer the table below).

2. The purchase of second hand goods must be made from unregistered supplier. 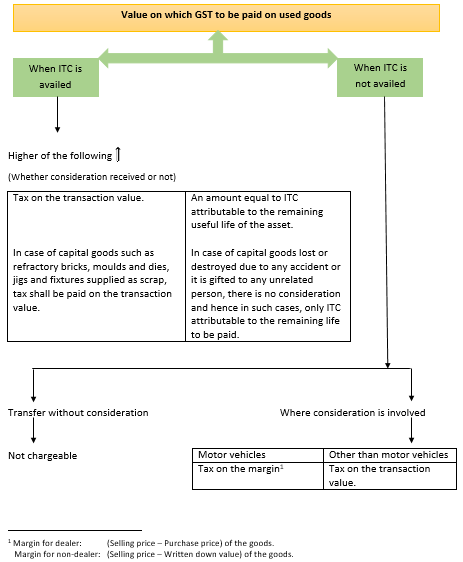 The margin scheme was implemented for a dealer dealing in second hand goods who does not claim ITC on the goods purchased and who sells the goods as such or after minor processing which does not change the nature of the goods. Vide Notification No. 8/2018-Central tax (Rate), dated 25/01/2018, the margin scheme was made applicable to all taxpayers on the sale of motor vehicle held as capital asset. It is pertinent to note that the margin scheme is applicable for a dealer other than a person dealing in second hand goods, only in the case of motor vehicles, that too only if input tax credit has not been claimed. 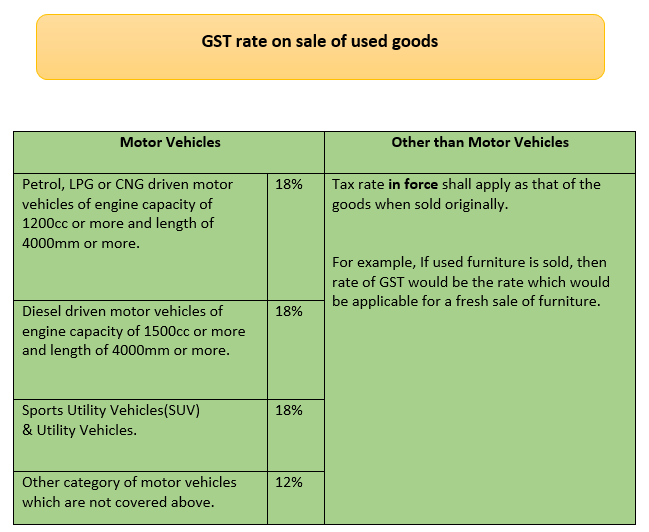 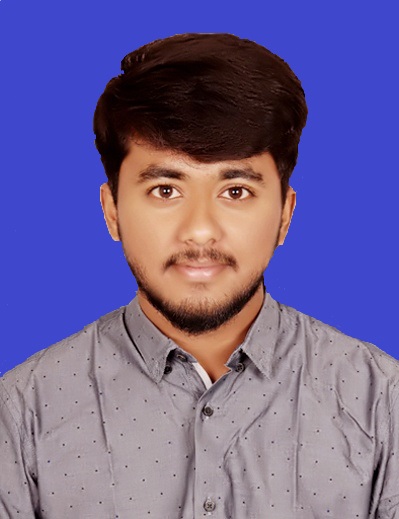