What is an E-Way Bill?

E – Way bill is an abbreviation for the words Electronic Way Bill. It is:

Who must issue an E-Way bill? 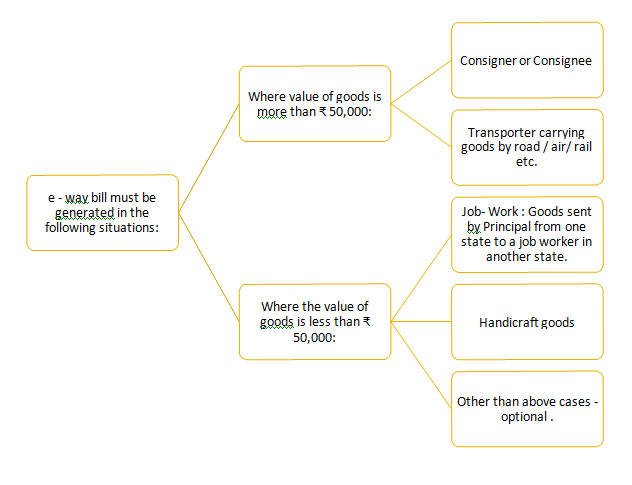 A is a consumer. He buys goods from B and asks B to deliver it directly to C. The value of the good is ₹ 51000. Who should file an e-way bill?

Ans:Since A is an unregistered person, he can ask B to issue an e-way bill based on the bill or invoice raised to A.

A, can also enroll as a citizen and generate the e-way bill himself.

A and B are registered dealers. A buys goods from B and asks him to deliver the goods directly to C who is A’s customer. The value of the goods is ₹ 51000. How many e-way bills are required?

In this scenario, tow supplies are involved and hence ideally, 2 e-way bills should be issued:

However, as per CGST Rules, 2017, either A or B can generate the e-way bill, But it has to be generated as per the following procedure:

How to generate an e-Way Bill:

An e-Way bill can be generated in the following ways:

The most common portal for generation of e-Way bill is https://ewaybillgst.gov.in

Pre-requisites to generate an e-Way Bill:

1. Registration on the e-Way bill portal.

2. Invoice/ Bill of Supply/ Challan related to the consignment of goods.

What is the validity of e-Way bills?

*Over dimensional Cargo – cargo carried as a single indivisible unit and which exceeds the dimensional rules prescribed in Rule 93 of the Central Motors Vehicle Rules 1989.

Contents of an e-Way bill:

he penalty will be INR 10,000 or tax evaded – whichever is greater.

The e-way bill provisions under GST aim to bring in a uniform e-way bill rule which will be applicable throughout the country.

The physical interface will pave way for digital interface which will facilitate faster movement of goods and improve efficiency.