Are you in the “List of Directors Disqualified” published by MCA?

Not to worry… here is the SOLUTION

The Gujarat High Court has quashed the list of disqualified directors published by the Ministry of Corporate Affairs (MCA) on September 12, 2017.

What was the MCA notification?

The MCA came up with various notifications in the month of September 2017, disqualifying 3,09,614 directors, it amounted to giving a retrospective effect to the provisions of section 164(2) of the Companies Act, 2013 ("Act, 2013"). Notably, in a so-called Operation Clean Money, the MCA struck off some 2,24,733 companies, from the register generally branding them as "shell companies", and simultaneously disqualified their directors, relying on a provision introduced in the Act, 2013 in form of section 164(2) which extends to private companies as well.

Section 164 of the Companies Act, 2013, provides for the eligibility criteria for appointment of a director in a company. One of the criteria provides that in case a company has failed in filing financial statements or annual returns for a continuous period of 3 years, the directors of that company shall become disqualified from being re-appointed in the defaulting company and appointed in other companies as directors for a period of 5 years from the date of such default.

According to Rule 14 of the Companies (Appointment and Qualification of Directors) Rules, 2014 the defaulting company is provided with a time period of 30 days from the failure in filing the financial statements or annual returns to file Form DIR-9, which if lapsed, attracts disqualification under section 164(2) of the Companies Act, 2013.

Why was this notification quashed by Gujarat High Court?

This notification created a paradoxical situation, as the office of all the directors in a Board would become vacant where they are disqualified under Section 164(2), and a new person could not be appointed as a director as they would also attract such a disqualification. 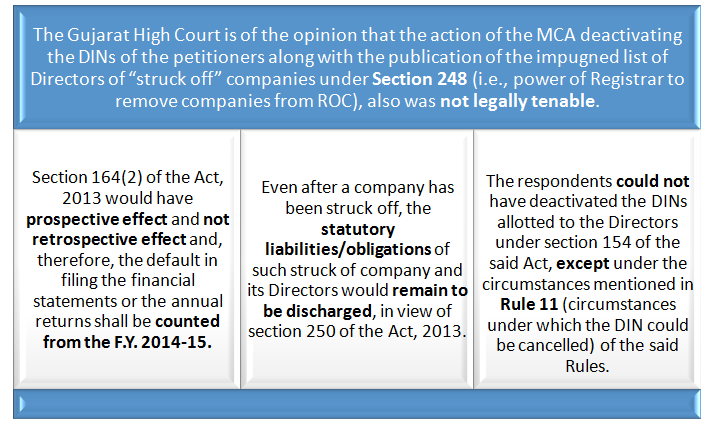 The High Court ruling means a very important relief to the 3,09,614 directors who have been disqualified by the MCA, it seems to be reason that as of date, based on the quashing of the MCA notification by the Gujarat High Court, companies are free to appoint the individuals in question, if they are able to get their DINs restored.